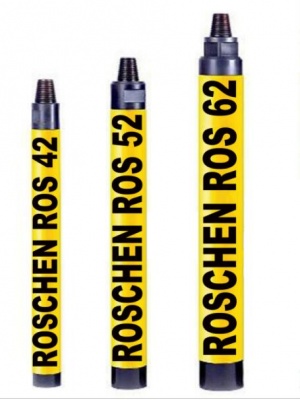 1.The introduction of DTH drilling hammer

Down-the-hole hammer, commonly known as DTH hammer, is basically a miniature electric drill screwed to the bottom of the drill string. Rapid hammering breaks hard rocks into small pieces and dust, which are blown away by the air of the DTH drilling hammer . Underground drilling is one of the fastest ways to drill through hard rock. Many problems related to other systems were not solved until the advent of the DTH hammer. With the DTH system and DTH drilling hammers, the energy is always behind the drill bit. A large amount of air is used to operate the drill through the drill string and then flush it effectively hole. DTH products and submersible drills have been designed for drilling in hard rock, overburden or loose formations for many different types of drilling applications. These markets often appear in the construction, oil and gas, mining, quarry, geothermal, wells and other drilling industries. Operators of DTH products drill holes from a few feet to 1,000 feet. In fact, one of the deepest holes ever drilled was 17,600 feet (5,364 meters) below the surface.

In the DTH drilling hammer, the impact mechanism (commonly known as the hammer) is located directly behind the drill bit. The drill pipe transfers the necessary feed and rotation to the hammer head and drill bit, plus compressed air or fluid for the hammer head and rock chips rinse. As the hole deepens, the drill rod is added to the drill string after the hammer in sequence. The piston directly hits the surface of the drill bit, and the hammer sleeve provides smooth guidance of the drill bit. This means that the impact energy does not need to pass through any joints at all. Therefore, impact energy is not lost in the joint, allowing deeper impact drilling. This is a huge breakthrough in the small portable well RIGS, which was previously limited. DTH drilling hammer on small rigs can now achieve the same results as large as heavy truck rigs.

It was only when the DTH system came along that many of the problems associated with the other systems were overcome. With the DTH system the energy source is constantly behind the drill bit,  the drill pipe's diameter is slightly smaller than the drill bit's , and a large amount of air can be operated through the drill post with the submersible hole hammer and then used to effectively flush the drill. DTH drilling hammers doesn't require a big downward thrust or high rotation speed, as such a light, cheap machine, it can be used for this drilling process: the machine can also be operated by one person, while some other systems require two people to operate. The DTH drilling hammer to the industry has great impact. Such as, it's the first time the drill hole can be placed where it was required because the DTH system gives a truly aligned, straight, accurately placed, clean drill hole that can be easily charged with explosives providing good control over the blasting process that was safer and which provided good fragmentation of the rock.  Since the energy is always directly behind the bit, the drilling depth can be increased without loss of performance. The system is capable of drilling under almost all rock conditions, something other systems cannot do. The surface of the quarry becomes more secure, with clear contours, flat ground, easy operation and movement of the loading equipment.

It still offers operators the same benefits that were initially brought to the quarry industry, but it is now used for many different applications, such as gold exploration, ground consolidation, geothermal drilling, shallow oil and gas wells, orientation, and piling. The emergence of tungsten carbide for bits (the first batch of bits are full steel) and the development of button bits plus the introduction of high pressure (above 25 bar) means that the DTH drilling hammer system can easily and effectively compete with other drilling systems. For example, DTH tools were used to locate trapped miners in Chile and to allow food, water and medicine to be delivered to them, and communications systems were established that eventually saved them safely.

With the above article, I believe that you already know something about DTH drilling hammers technology. If you are interested in DTH drilling hammers or other products, contact our company soon. We will provide you with the highest quality products and the most considerate services.