How does a DTH hammer drill work?

The role of the DTH hammer is to break the hard rock into small pieces and blow the dust through the air exhaust in the hammer. It is one of the quickest ways to drill hard rock. Below, you will learn how it works and its features. 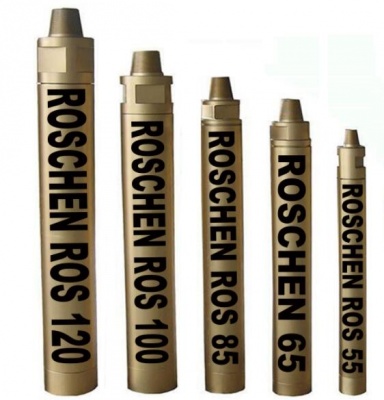 The introduction of DTH hammer drill

Down-the-hole drill, usually called DTH hammer by most professionals, is basically a micro electric drill screwed on the bottom of the drill string. Since the DTH method was originally used to drill large diameter holes down in surface drilling applications, its name derives from the fact that the percussion mechanism follows the bit down into the hole. Later, the application of DTH method in underground was found, in which the direction of drilling is usually upward rather than downward.

DTH hammer drilled into a variety of rocks, the types of which went well beyond the original concept of early blasting hole drilling. There are six series of DTH hammer, which are mainly used in mining, water wells, geothermal, foundation, oil and gas drilling projects. The size is from 2 inches to 24 inches, so choose the right hammer depends heavily on the size of the hole and the rock formation.

How does a DTH hammer work?

First the compressed gas enters the DTH hammer through the drill pipe, and then it is discharged from the button bit of the DTH hammer. The rotary motion of the lower hole hammer is provided by the rotary hammer, while the thrust of the shaft is provided by the propeller and passed to the DTH hammer through the drill pipe. The brazing layer is mainly used to transfer thrust and rotary motion to the bit. The clasp controls the axial movement of the bit, while the check valve is used to prevent ballast and other impurities from entering the DTH hammer when the pressure supply is stopped. During the drilling process, the DTH hammer pushes the submersible hole button position onto the brazing sleeve. At this point, the piston directly hits the bit to drill out the hole. When the rig was lifted from the bottom of the well, it began to blow violently. This is how the DTH hammer works.

Characteristics are as follows:

1.As the ROS series high pressure, DTH hammer, the drilling speed is the first in the world, and the air flow is the least required when working. Their quality is the most stable and widely used in underground engineering, also for diving of various medium hardness, high hardness and a certain degree of poor drill ability of rock.

2. The DTH hammer is designed with a strong wind system to remove all high pressure gases and keep the bottom of the well clean. Durable piston, after hardness treatment can be replaced at both ends, extended service life.

3. Variable steam shape. According to the rock's hardness and wear resistance, you can change the expansion rate to achieve the best flash effect and the highest drilling efficiency.

5. The front joint has multiple threads for easy detachable .

6.There is no liner (nylon tube) in the drill to eliminate the thermal expansion, contraction and damage of the drill during operation.

Only when the DTH hammer appeared, many related problems were overcome. As the manufacturer of DTH hammer, we produce, design and sell all kinds of DTH hammers. We will provide you the best quality and functional assurance products, as well as the best service.