Design and operation of an extended core barrel.

The extended core barrel's (XCB) coring system is used in sedimentological, climate, and paleoceanographic studies. Extended core barrel is usually used when the formation becomes too hard for the piston core or when its hardness is not sufficient to allow the use of the rotary core barrel (RCB) for effective harvesting. 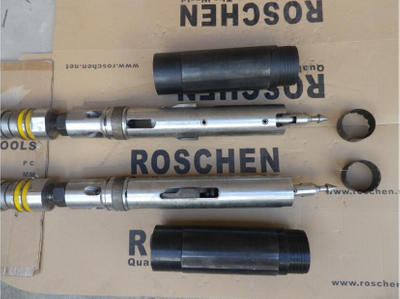 The development of extended core barrel is aimed at recovering sediment, where sediment is too hard for the piston core and undisturbed cores in these sediment zones. The extended portion of the spring loading crosses the core bit so that the extended core barrel protrudes up to 7 inches below the bit to capture the soft sediments before being disturbed by the water jet. Harder sediments will force the drill tube to retract the drill bit to protect the bit. In addition, the extension of the spring loading can reduce the adverse impact load due to the sloshing of the bit. Therefore, even in most hard sediments and basalts, extended core barrel still outperforms the rotating core. However, is after the advanced piston type corer (apc) reaches its limit, it can use the same bha and bit to continue drilling in the same hole, before the drill string trip must be replaced to fit the bha the current extended core barrel interval length is 13.4m (44.1ft) from the bottom of the cut shoe to the top of the latch block, the disc spring stack is out of date, only retained as a spare i untried compression spring will produce unexpected problems. B. main sub-assemblies top-down main components include latch, hex spline action range section, spring shaft with spiral compression spring, quick release, exhaust confucius, core barrel with non-rotating transformation core bushing and cutting boots.

Latch was developed specifically for use with extended core barrel, but can be used with any other tool that requires a press or drive mechanism. Hatch body diameter is 3/4 inch. Two Lacky dogs are locked at 5 inches in diameter. When the extended core barrel entered the pipeline, the Latch dogs were forced on the spring (rate = 100 lbs / inch) until they fell into the pull neck area. The dog is still frustrated in the 41/8 "borehole as the tool moves along the pipe. The hatch is expanded to 51/2" ID in the BHA; when extended core barrel landed, the latch was in Section. The spring forces the dog to lock on the high point of the neck. If an upward force is applied to the tool, move. When the tool needs to be released for retrieval. Overshoot is lowered by the line to lock the neck of the head. A pull on the wire removes the pull neck from under the locking dog, and the dog enters the release tool from under the rag sleeve.

The hexagonal shaft of the outer thread drive pair is similar to the contour of the inner hexagonal thread head, and can provide up to 8 inches of axial displacement while continuously delivering torque.

A 34-inch-long spiral compression spring with a spring stiffness of 250 lb/in initially keeping the extended core barrel fully stretched. The 2000 lb compression force will compress the tool by 8 inches, at which point the convex drive shoulder heads on the concave inner hex.

At present, both extended core barrel and apc use fast release devices, which shorten the turnaround time between the continuous cores by providing a fast tool to connect and disconnect the core tube from the upper part of the tool. The convex and concave parts engage and rotate 90° to lock together.

Exhaust valve Vent Sub is fitted with a one-way check valve that, when the core enters, allows fluid to drain from the core cylinder into the cylinder annulus, but prevents flow in the opposite direction to protect the core from being washed out during the retrieval process.

A core of up to 9.8 m (32.1 ft) can be recovered in the standard butyrate core liner. The lower end of the Vent Sub provides an inner ring for the bearing device known as Liner Hanger, which is the upper support for core liner. The outer diameter drops from 3 inches to 27/8 inches with a span of 6 inches and the bottom is mounted on a low friction bushing. The 2.817-inch outer diameter liner is not rigid and can bend freely until it touches the inner barrel wall anywhere. This additional inductive resistance is considered a minor problem compared to the complexity caused by the use of non-standard liners.

We believe that through the above, you must already know the design and operation of the extended core. If you have any questions, please feel free to contact us.